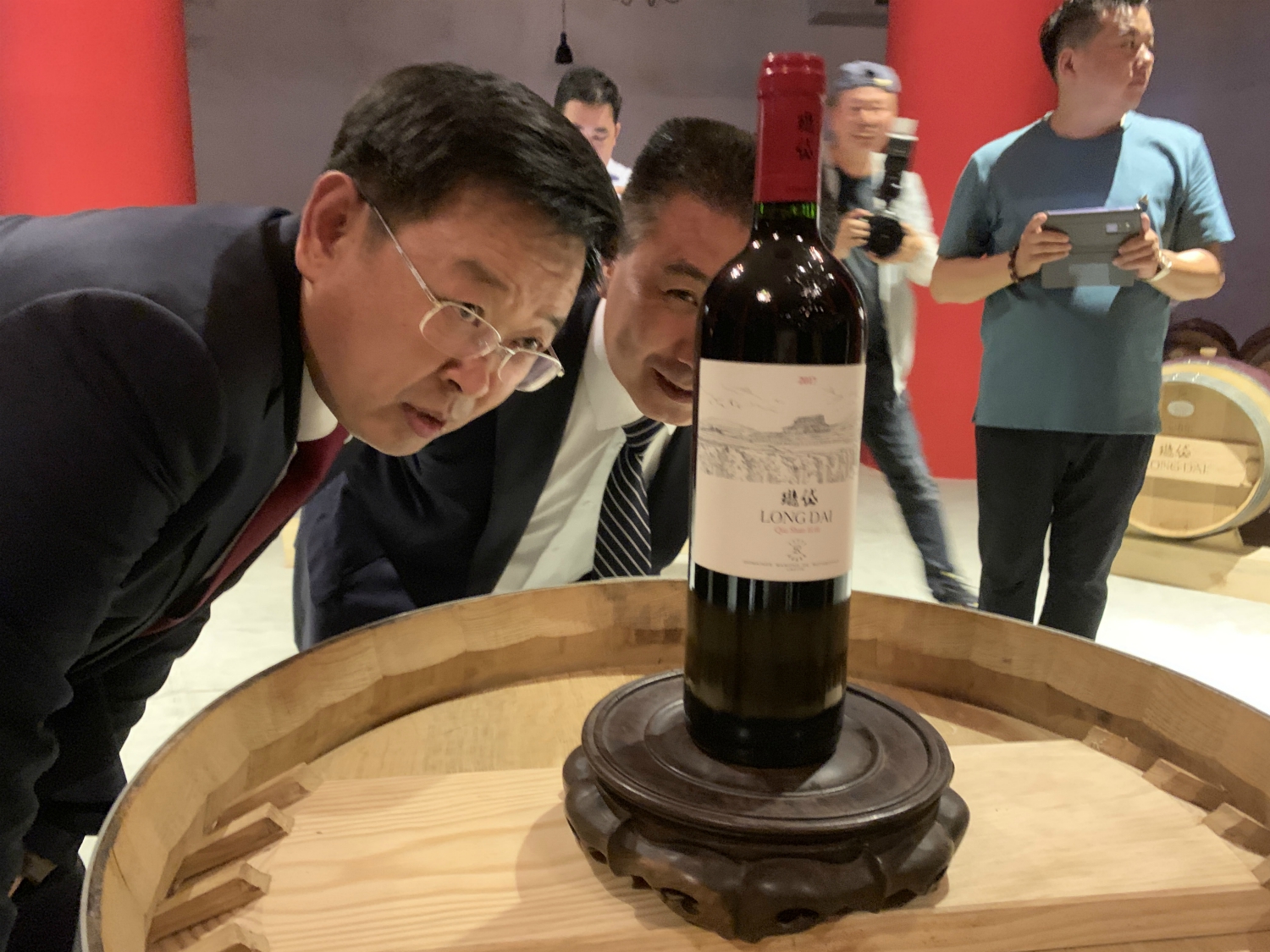 DBR Lafite has unveiled its first ever Chinese wine Long Dai (瓏岱), a premium wine produced from its Chinese winery in Penglai with limited production of 2500 cases.

The price of Long Dai (pronounced Lung Dye in English) has not been officially revealed yet but will be slightly lower than LVMH’s Ao Yun which retails for US$300 a bottle, Lafite CEO Jean-Guillaume Prats, revealed when asked it at the wine lunch event.

The first release of 2017 vintage is made from a blend of Cabernet Sauvignon, Cabernet Franc and Marselan – a varietal that China sees closest of its own – picked from 30 hectares of terraced vineyards planted in the granite soils at the foothills of the Qiu Shan Valley, 20km away from the Yellow River.

For 10 years, it has been a long game of anticipation and guessing that has firmly seized Chinese wine trade’s attention after DBR Lafite, parent company of Bordeaux first growth Château Lafite Rothschild, purchased a 400ha land in China’s eastern Shandong province’s coastal Penglai city in 2009.

“Our family have been winemakers at Lafite for 150 years so it is in our culture to be patient and take our time to make sure we release a wine we are proud of.” said Saskia de Rothschild, Chairwoman, who has just succeeded her father, Baron Eric de Rothschild, at the head of the family’s wine estates. “This vintage of Long Dai is the first chapter of a very long story as winemakers in China.”

For years, Lafite has enjoyed its unparalleled success in China, its most valuable export market today from its grand vin Château Lafite Rothschild to its more accessible Légende and Saga. In 2009 the affinity between Lafite and China are strengthened when the French wine group decided to open a Chinese winery.

On July 3, the identity of the wine project was unveiled by DBR Lafite’s Baron Eric de Rothschild and his daughter Sasika de Rothschild in Penglai, flanked by a group of key officials from Shandong and Penglai.

Nestled in Qiu Shan Valley, Domaine de Long Dai looks nothing like its neigbouring wineries fashioned as either wine Disneylands or French Chateaux. Built with many Chinese motifs and inspirations, the French winery ironically looks more at home than its counterparts.

But in terms of vine planting and selection, it took many trials from 2009 to 2011 to decide on planting locations. “At the beginning it’s a completely a white paper to write history,” Olivier Trégoat, Director of DBR (Lafite) international estates, who led the technical team at Domaine de Long Dai, exclaimed.

The location of vine planting was selected after his team tested over 400 soil pits. Vines are later planted in 2011 on terraced vineyards, similar to Porto in Portugal, on granite soil on the foothills of Qiu Shan Valley where winter is dry and cold, but not cold enough to bury vines like Ningxia in northwestern China. This according to Trégoat is a key reason for choosing Shandong over Ningxia.

“We don’t want to bury vines. It’s in our culture to plant vines for one century and in the north the problem with burying the vines is that the vines can survive perhaps 15 years or 20 years but not one century,” he explained.

Adding that the coastal city of Penglai’s climate is warmer than Bordeaux, he said rainfall however is concentrated in late July and early August, which means “September and October are completely dry and for the past four years we have the time to pick when we want,” he continued.

The first vintage was originally planned for release in 2018 but was rescheduled for 2019 after a longer period of ageing, which is more than paid off as the tannins in wine are better integrrated to produce a wine of elegance and finesse. The wine is vinified separately before blending and aged for 18 months in French oak barrels made by Tonnellerie des Domaines in Pauillac, according to the winery.

The wine will be distributed by Pernod Ricard in mainland China starting from September 19 this year, and export market will likely start in January 2020, according to Prats.

With the arrival of DBR Lafite’s much anticipated Chinese wine Long Dai, the comparison with another French wine and spirits giant LVMH’s premium Chinese wine Ao Yun is something that hangs in a keen observer’s mind, as both are overseen by Prats who worked as CEO of Moët Hennessy Estates & Wines at LVMH before joining DBR Lafite as CEO last year.

“As a very a good arrogant and convinced Bordelaise like myself,” he teased when asked about the comparison by Wang at the launch event. After taking a long pause, he continued, “They are both very good, Natalie and they are both for sale.”

On a more serious note, a key difference as he points out is their sales strategy in China. Ao Yun sells roughly two thirds of its production overseas, while only one third in China. “Here it’s going to be totally opposite, we are going to sell 1700 or 1800 cases in China or maybe 200 or 300 cases overseas. And I am sure some of the wines sold on export market will come back to China,” he said.

Counterfeit wine is a problem that plagues known imported wine brands and domestic wines including Pengolds and China’s GreatWall within the country. In anticipation of Long Dai’s high demand and ensuing counterfeit problem, DBR Lafite has adopted a few measures to prevent faking the bottles.

Each bottle of Long Dai has a number of anti-counterfeit protections. Notably, DBR Lafite has introduced a new technology for its 2017 vintage release where each bottle will be fitted with NFC tracking technology – which is currently mostly used for wireless payments and travel.

In the case of Long Dai, the NFC tag is built into the capsule. The technology allows an individual to scan a bottle of Long Dai by placing their smart phone flat on the top of the capsule. This will activate the NFC chip. If it is the first time the bottle has been scanned, the user is advised to download a secure application by Selinko, experts in authentication and security, through which they can verify the authenticity of their bottle.

Additionally, the bottle’s front label is hidden with a few circles that would prevent fraudsters from peeling off the labels in one piece even after soaking the label. Serial numbers are also planted in bottle’s beck and back where only the winery can scan with laser to check a bottle’s authenticity.